The eighteenth edition of the International Exhibition “Green is Life” took place on 27-29th August in Centrum EXPO XXI in Warsaw. Its motto was “Symphony of Colours”. The exhibition was organised by Polish Nurserymen Association and Agencja Promocji Zieleni.

For the first time exhibition stands were located not only in 3 EXPO halls, but also outside. The area ordered by exhibitors increased by over 20% compared to the 2009 edition and grossed 12 850 m2.

The exhibition was visited by 16,600 people – including over 5300 professionals. The main addressees of the Exhibition were the “green industry” professionals: plant traders (33%), landscape architects, garden and public green contractors - 28%, nurserymen and gardeners (16%), local authority investors and officials responsible for public green - 7%, products and services suppliers and scientists.The professionals came from all over Poland, including its most distant parts. Foreign guests represented a dozen of European countries, as well as North America and Asia. The most numerous groups of customers came from the Russian Federation, Ukraine, Lithuania, Belarus, Germany, The Netherlandsand Belgium.

Official guests of the Exhibition who participated in its official opening were: Minister Marian Zalewski – undersecretary of state in the Ministry of Agriculture and Rural Development, Professor Alojzy Szymański, the rector of Warsaw University of Life Sciences, Ambassador of the Kingdom of Belgiumand a representative of the Government of Flanders in Poland.

Guests at the Exhibition were also Counsellors for Commerce and Agriculture from embassies of a number of EU countries. They represented Belgium, The Netherlands, Spain, Germany, Italy, Ireland, Finland, Hungary, Czech Republic, Cyprus, Greece and Bulgaria.  The official opening ceremony was also attended by the Chairman of the Agricultural Market Agency, chairmen of sector associations – Association of Gardening Engineers and Technicians, Polish Garden Centre Association, Landscape Architecture Association, representatives of governmental and capital city offices and members of parliament.

50.5% of the exhibition area was occupied by plant producers (167 companies). Exhibition stands presenting plants occupied the entire larger EXPO hall (5250 m2) and more than a half of the new hall (Hall 4).  Poland was represented by 96 nurseries and garden farms. As many as 68 of them were members of the Polish Nurserymen Association. The area occupied by Polish nurseries increased by 40% in comparison to last year. The quality of displays was also much higher this year; exhibition stands were carefully designed and varied. There were 71 foreign nurseries represented at the Exhibition. These were chiefly Dutch, German, Belgian, Italian, Czech, Spanish and French companies.  Rich assortment of plants, variety of forms, numerous novelties, as well as innovative displays made the biggest impression not only on the new, but also on the permanent guests of this biggest presentation of ornamental plants in Poland and in this part of Europe.

The second largest department at the Exhibition was devoted to nursery and green areas Methods and Technologies. This time there were 76 companies presenting their products.  Exhibitors were presenting new and well known machines, equipment, tools and technologies for nursery production, as well as a wide assortment of growing media and substrates, watering systems, packaging and labelling systems, fertilizers and other means necessary for plant growing and care.  In this sector, one could observe, apart from Polish exhibitors, companies from Germany, The Netherlands and Austria.

Every year “Green is Life” attracts more and more exhibitors presenting garden equipment and decorations. This year there were 41 companies exhibiting their products. The products included: ornamental pots, accessories for water features, paving materials, furniture and small architecture products. Target groups for these products included wholesalers and distributors, designers, but also the end-users – retail customers. Moreover, the exhibition was also attended by all major publishers from the green sector displaying a wide variety of magazines, specialised books, guides and catalogues.

An Attractive and Rich Programme

The Exhibition was accompanied by numerous events. The programme was suited to meet varied needs of visitors. Professionals met already on Thursday on a conference on public green. The two-day meeting entitled “Green City – a Harmony of Space” was attended by 140 public green managers and creators from Polish cities and municipalities. The seminar “Riding the Wave to Success in Your Garden Centre” hosted by John Stanley, a worldwide known management and marketing “guru” and expert, was intended for garden centre owners and salespersons.  His first conference in Poland attracted 350 listeners.

Green workshops, garden fun and competitions were prepared for children accompanying their parents.Rare and new plants could be bought at a fair accompanying the Exhibition.

Symphony of Colours in a Garden

The leitmotif of the Exhibition – A Symphony of Colours – was reflected in the concept of the ShowGarden placed in front of EXPO halls. The garden was divided into small parcels by means of islands and screens of colourful plants. The arrangement created a colourful mosaic on a beautiful clinker brick paving. The arrangement was made lighter by trellis woven of white wicker. Black pines and birches overlooked the arrangement. The garden was designed and built by landscape architects Bartłomiej Gasparski and Sebastian Kochel of Palmett Markowe Ogrody S.C.
Plants were supplied by  Szkółka GRĄBCZEWSCY,

Three competitions were finalised during the Exhibition.

GREEN LAUREL was awarded to:

for the best garden and green areas product to QUICK-MIX Sp. z o.o. for GaLaKreativ – stone and ornamental aggregate binder

GREEN LAUREL for the best nursery product was not awarded

In the PLANT NOVELTIES CONTEST, the Jury gave awards to the following out of 35 competitors:

HONOURABLE MENTIONS were granted to:

The Polish Nurserymen Association awarded its traditional Honorary Laurel to MS. Anna Słomczyńska – journalist and producer of MAJA W OGRODZIE (TVN) (“Maja in the Garden”, a TV show) for “constantly inspiring and developing gardening passion among the public”.

The MOST ATTRACTIVE STAND competition

The most attractive plant stand category

The most attractive stand in other categories (“non-plant” category)

More information and many photographs are available at: www.zielentozycie.pl 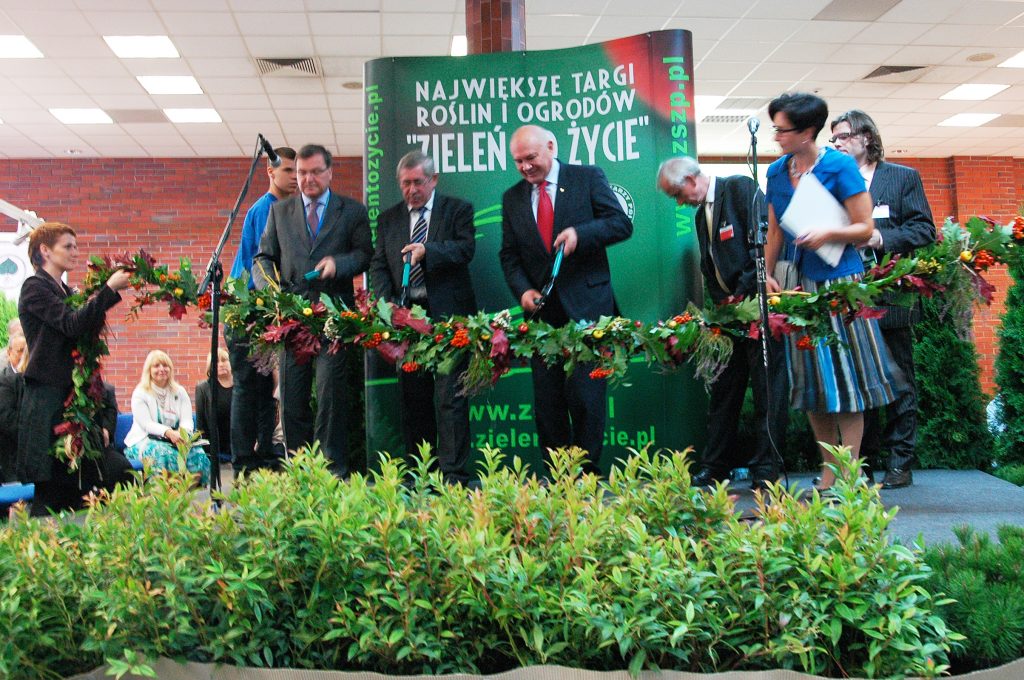 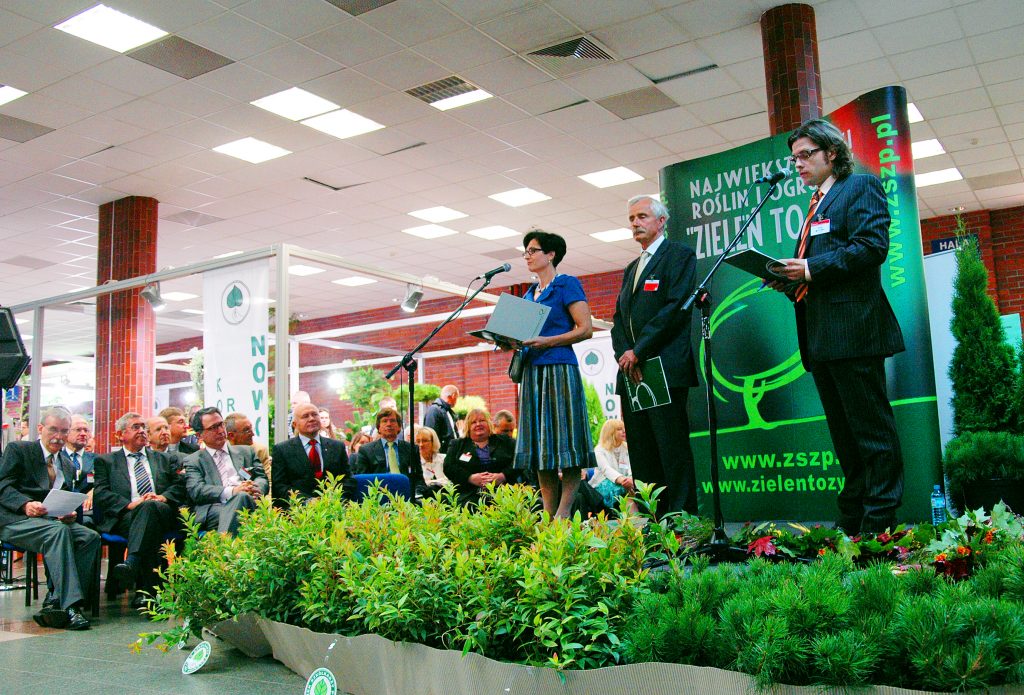 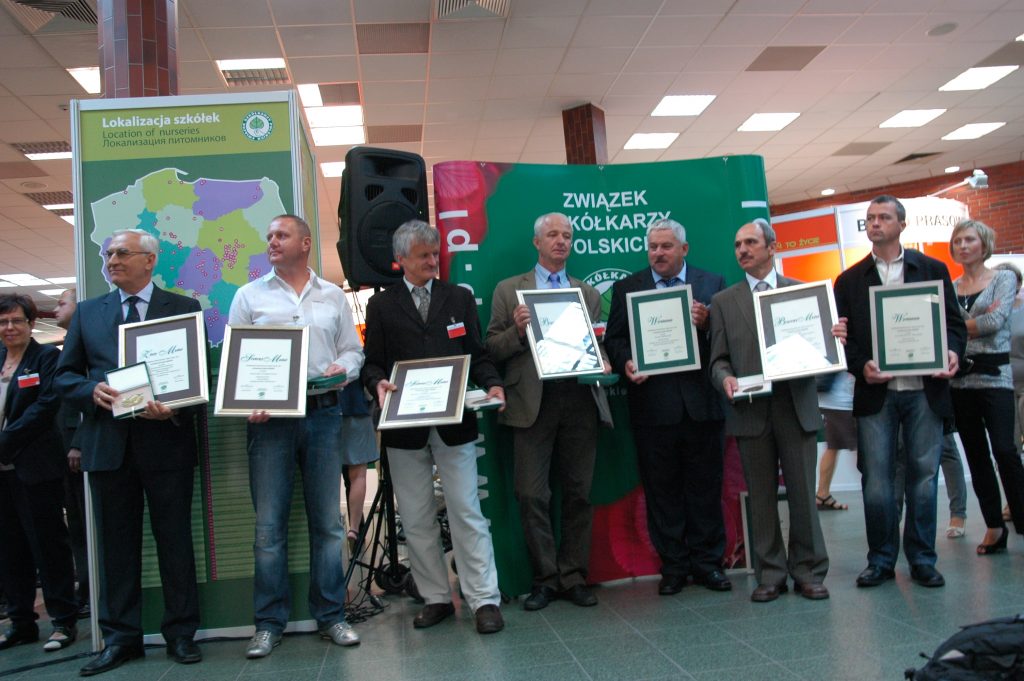 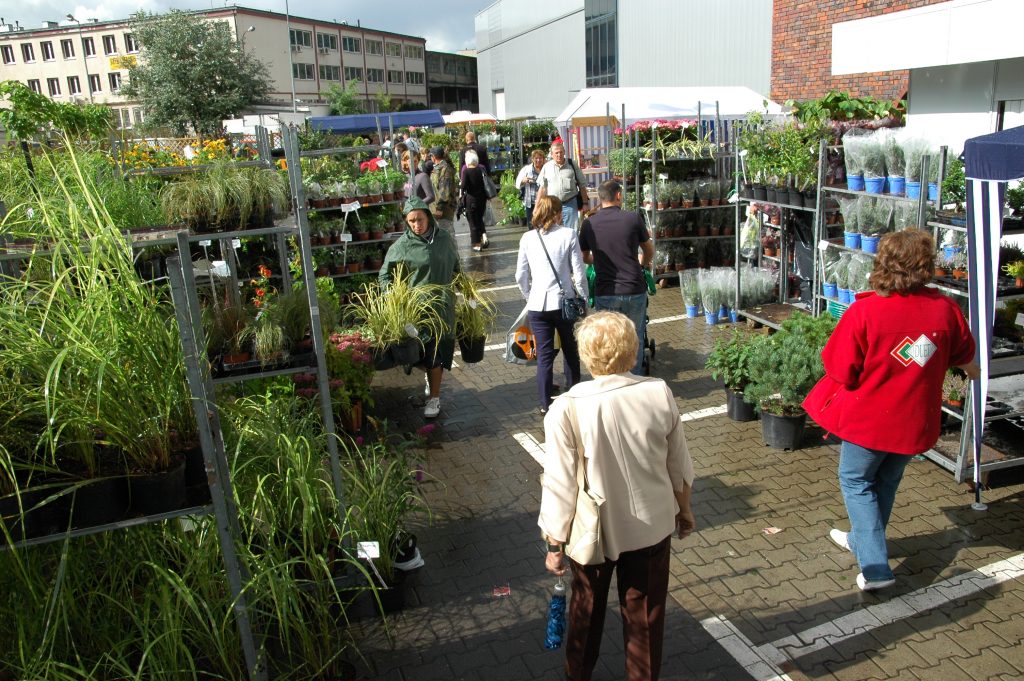 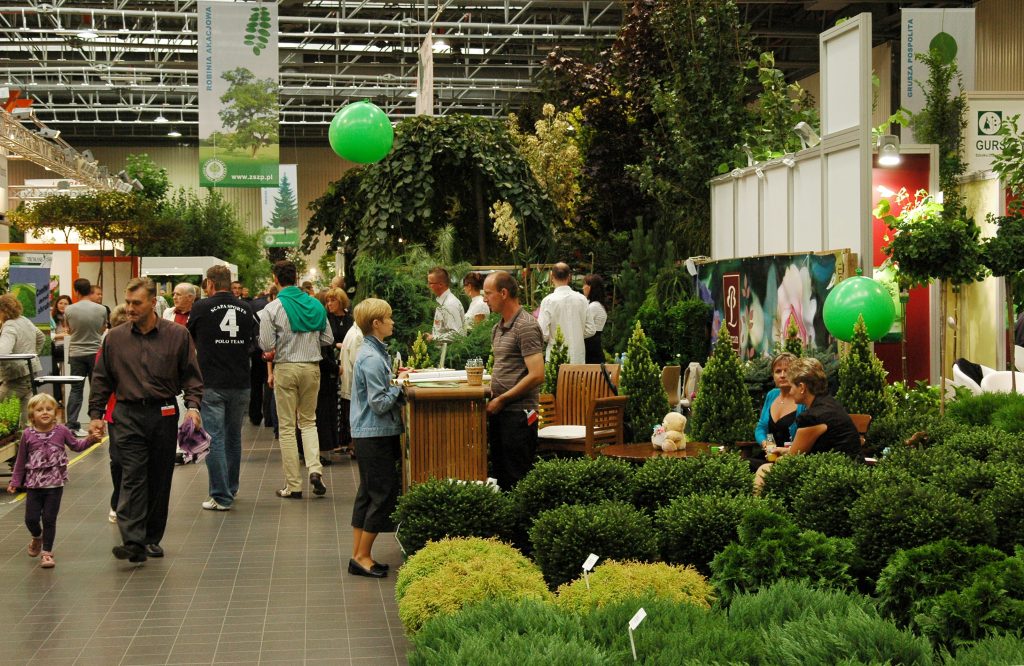 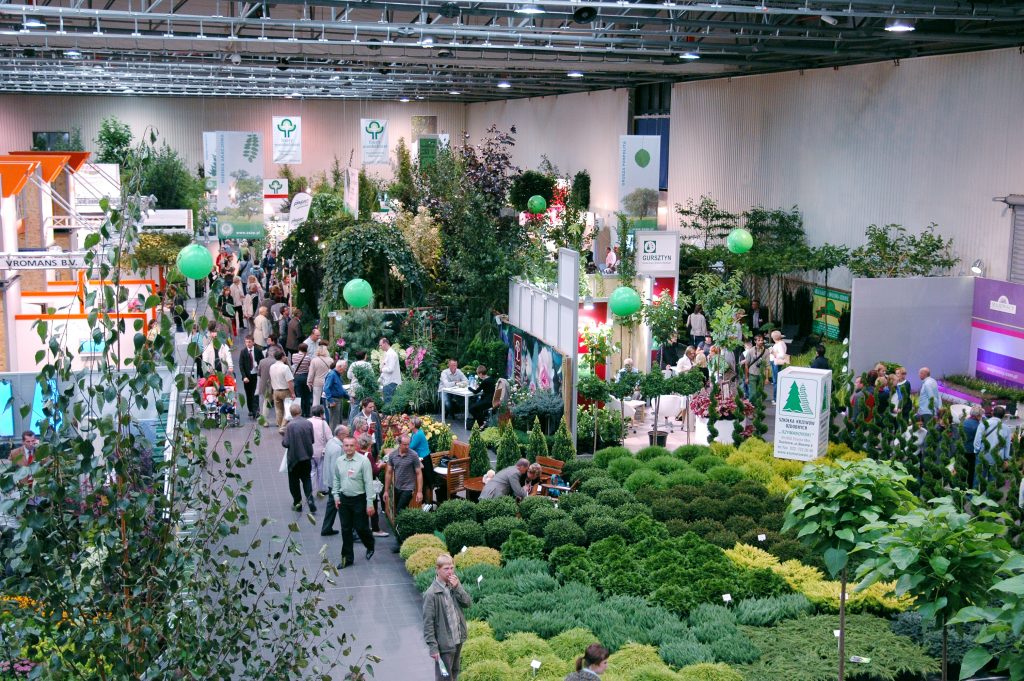 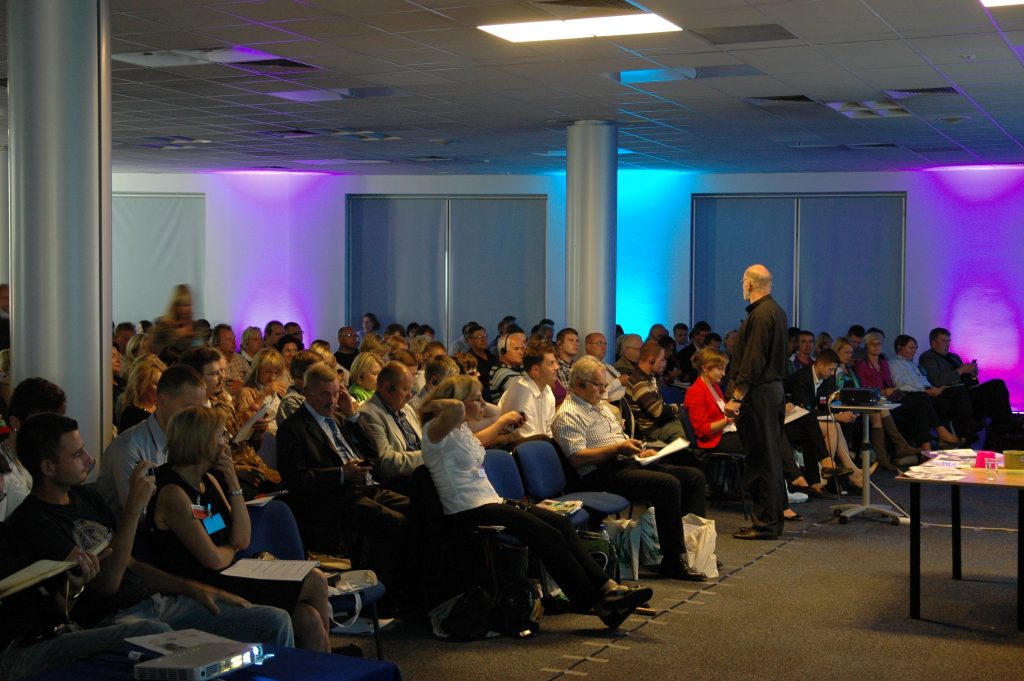 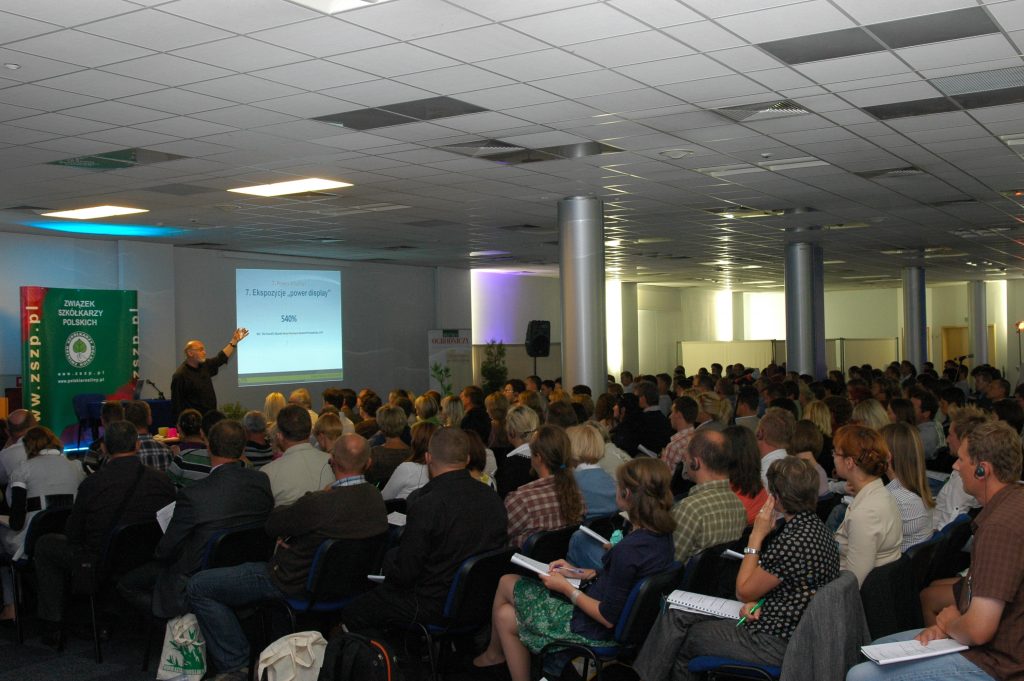 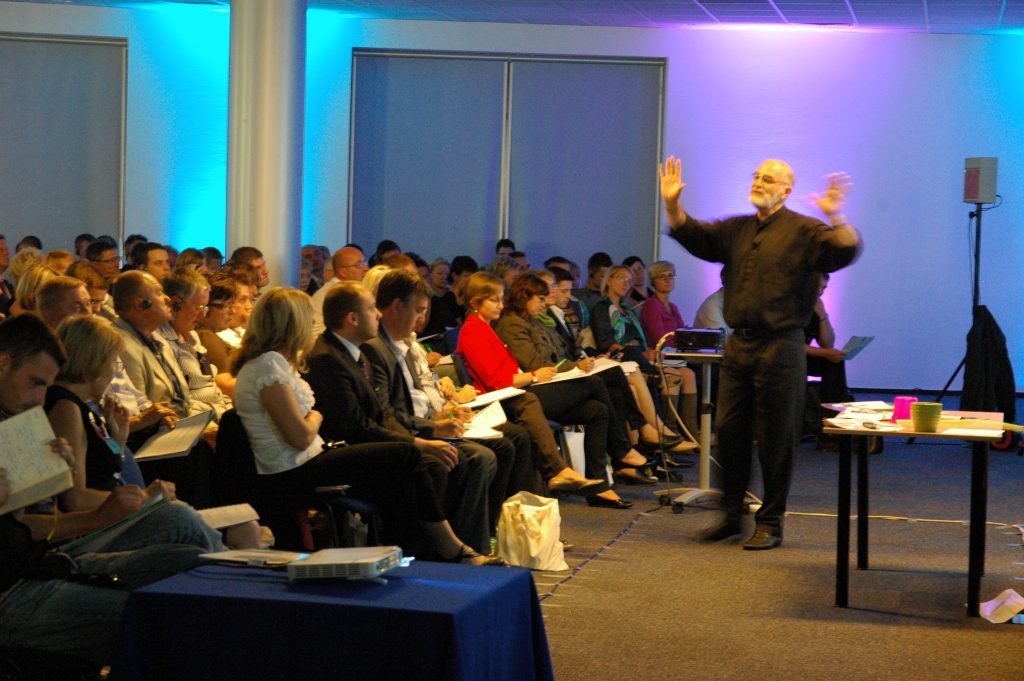 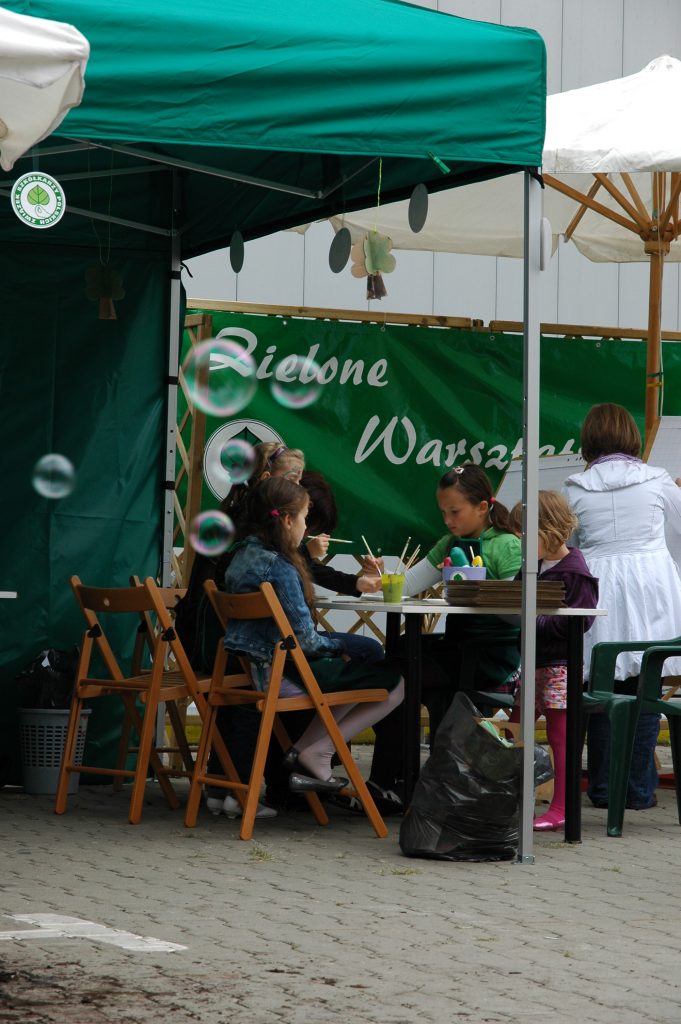 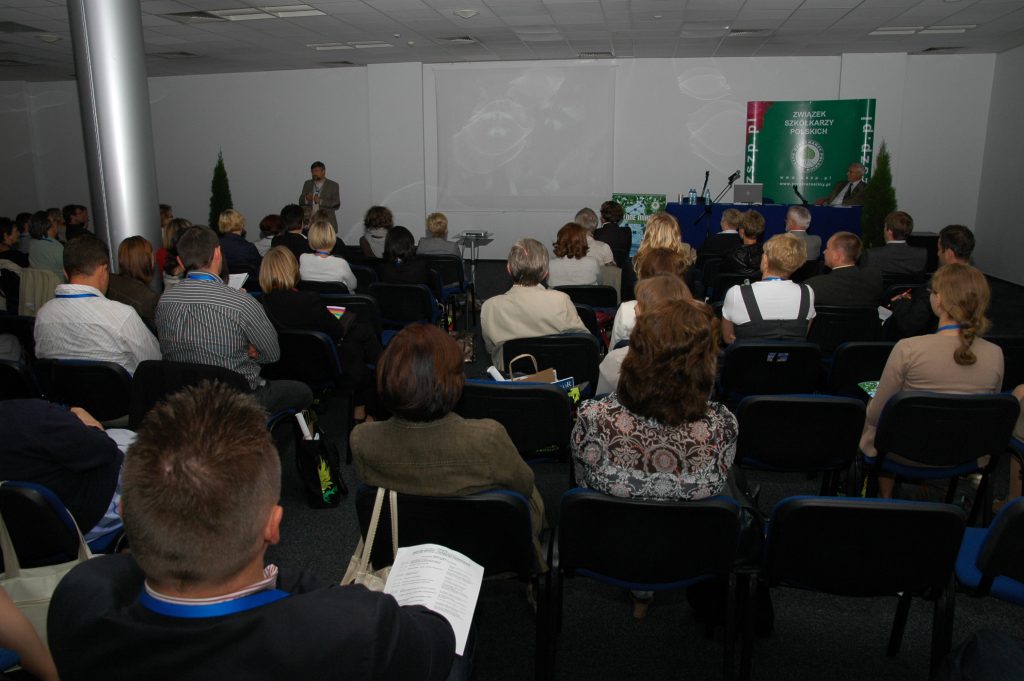